What is plagiocephaly and how can an orthotist treat it? 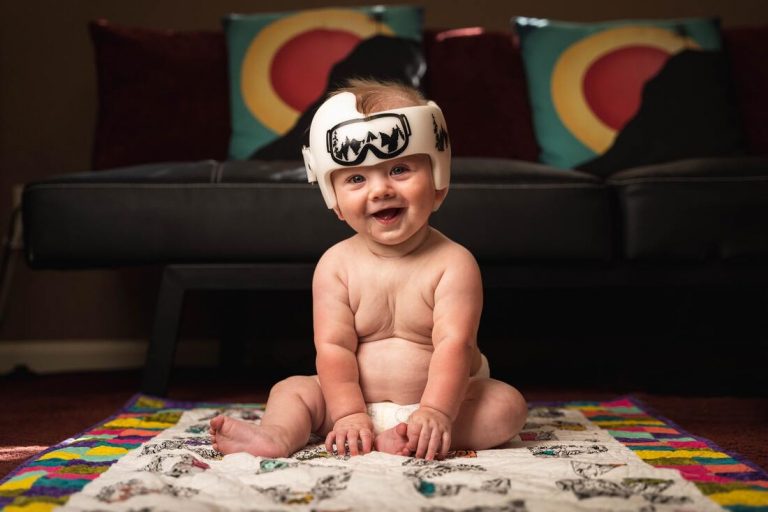 We are going to refer to what is plagiocephaly and how can an orthotist treat it?; these days, we see a lot of babies wearing colorful helmets. That’s because they suffer from a flat head or some other condition that requires extra protection and a dynamic force on their skull.
Plagiocephaly is becoming more common due to babies sleeping on their backs, which is a safe way to lay babies down because it protects them from Sudden Infant Death Syndrome (SIDS).
In this article, we’ll discuss the flat head condition, its causative factors, and treatments with a focus on orthotic treatment.
Let’s dive right in.

Plagiocephaly is simply the flattening of a baby’s head. It usually goes away on its own as the bones develop and fuse to create a round shape.
In severe cases, however, treatment is required. Plagiocephaly can happen to anyone if proper precautions are not taken, but it’s mostly reported in premature infants since their skull bones are much softer and pliable.

Plagiocephaly has various causes, which can be prenatal to postnatal but more times than not the actual cause of Plagiocephaly is unknown.
Prenatal causes which lead to Plagiocephaly include a small uterus, twins, or unusual pressure on the head during pregnancy although these lead to only mild Plagiocephaly.
Other causes include sleeping in the same position [known as positional Plagiocephaly], muscular torticollis, and craniosynostosis.

Almost all babies have some level of asymmetry of the head when they’re born. And the bones align themselves as the skull matures.
The severity of Plagiocephaly is determined by two scales; the Cranial Vault Asymmetry and the Cephalic Ratio.  The results help classify your baby’s Plagiocephaly in one of the three categories of mild, moderate, and severe.
When you visit the Orthotist for assessment, s/he measures the baby’s head to determine what kind of treatment, if any, is required to correct the skull shape.

The most prominent symptom of Plagiocephaly is flattening of the head from one side. It’s diagnosed based on the test performed by the Orthotist or a pediatrician.
Other symptoms include facial asymmetry, mismatched ear levels, prominent blood vessels, and palpable bony ridges around the flattening.

Oftentimes the Plagiocephaly will fix itself once your baby starts to lift his head and move around.
Various treatments of Plagiocephaly include:

What’s the Orthotic Treatment of Plagiocephaly?

Orthotists are a part of the multi-disciplinary team of medical professionals who treat your child’s Plagiocephaly. From pediatricians to neurosurgeons and physical therapists, several team members decide on the best treatment approach for your baby based on the severity of the condition.
The cranial band is the generally preferred orthotic treatment for this condition.
But that’s not the only treatment. Babies aged less than 2 months old rarely ever need a cranial band. In their case, proper positioning and exercises are enough to correct the deformity.

1. How Does the Cranial Band Work?

The cranial band is also known as the baby helmet and the cranial orthosis is made of a rigid thermoplastic material. It offers support to the growing skull while applying gentle pressure to the bones.

Each cranial band is customized with an opening close to the flattened region. The main purpose of wearing the baby helmet is to realign the skull bones.

2. How Long Does Your Baby Have to Wear the Cranial Band?

The duration of wear depends on how early you start treatment. For babies aged less than 6 months, 12 weeks of wearing the cranial band are enough time to correct the Plagiocephaly. On average, the treatment lasts for three months.
The time increases with an increase in the Plagiocephaly severity and the age of the baby.
Your baby has to wear the helmet for 23 hours a day.

3. How to Care For Your Baby and Their Helmet

The good news is that the baby helmet is not uncomfortable for the kiddos.
When your baby first starts wearing the cranial band, we recommend one hour off and one hour on. That helps babies get used to wearing it and also gives you an idea of how much your baby will sweat in the orthosis.
You’ve to follow your Orthotist’s guidelines while cleaning the cranial orthosis and washing your baby’s head. And reach out to them in case your baby looks uncomfortable in it because that could mean that there’s an issue with the cranial band.

There’s some controversy around the use of the cranial band for Plagiocephaly. But various researches have concluded that baby helmets are effective for reducing flat head deformity.

One study found that the effectiveness of the cranial band for Plagiocephaly increases if the treatment is started early, before 24 weeks of age. Here, researchers found that 83% of their sample had a positive result after using the cranial orthosis.

Another research conducted on 18 months and older babies also concluded that the cranial band reduces the deformity if it’s worn for the prescribed duration. However, they also found that the treatment lasts for around 16 months when it’s started later in the baby’s life.

Plagiocephaly is a big word and scares most parents who’re hearing it for the first time. But the condition is much more treatable as you’ve read above.

If you’re looking for a treatment plan for your baby’s Plagiocephaly or need a cranial orthosis fitted, then reach out to us for a free consultation. We’ve got clinics all over the country and experienced Orthotists to help you.

Call Us
Find Us
We use cookies on our website to give you the most relevant experience by remembering your preferences and repeat visits. By clicking “Accept All”, you consent to the use of ALL the cookies. However, you may visit "Cookie Settings" to provide a controlled consent.
Cookie SettingsAccept All
Manage consent

This website uses cookies to improve your experience while you navigate through the website. Out of these, the cookies that are categorized as necessary are stored on your browser as they are essential for the working of basic functionalities of the website. We also use third-party cookies that help us analyze and understand how you use this website. These cookies will be stored in your browser only with your consent. You also have the option to opt-out of these cookies. But opting out of some of these cookies may affect your browsing experience.
Necessary Always Enabled
Necessary cookies are absolutely essential for the website to function properly. These cookies ensure basic functionalities and security features of the website, anonymously.
Functional
Functional cookies help to perform certain functionalities like sharing the content of the website on social media platforms, collect feedbacks, and other third-party features.
Performance
Performance cookies are used to understand and analyze the key performance indexes of the website which helps in delivering a better user experience for the visitors.
Analytics
Analytical cookies are used to understand how visitors interact with the website. These cookies help provide information on metrics the number of visitors, bounce rate, traffic source, etc.
Advertisement
Advertisement cookies are used to provide visitors with relevant ads and marketing campaigns. These cookies track visitors across websites and collect information to provide customized ads.
Others
Other uncategorized cookies are those that are being analyzed and have not been classified into a category as yet.
SAVE & ACCEPT